School Leadership Interventions Under the Every Student Succeeds Act: Volume I - A Review of the Evidence Base, Initial Findings

Recognizing that principals can be powerful drivers of improved teaching and learning, the revised law governing the federal government's major source of dollars for public school brings new funding possibilities for activities to promote strong school leadership. At the same time, to be eligible for funding from several significant programs within the 2015 Every Student Succeeds Act (ESSA), activities must show evidence of effectiveness. This RAND report describes major ESSA funding programs that can be used to pay for school leadership improvement efforts; the law's categories of acceptable evidence, and where and how they come into play; and activities supported by research in the top three evidence categories. An accompanying commentary, particularly useful for states and districts, summarizes the report's key points and identifies a number of school leadership programs that appear to be eligible for funding under the law, based on the strength of their research base. Later in 2016, a second RAND report is expected to delve into studies that would qualify for the fourth category of evidence. ESSA is the successor to the No Child Left Behind law, itself the descendant of a 1965 law meant to promote equal opportunity in public school education. Its Title I section, the largest single source of federal funding for public schools (some $15 billion to $16 billion annually), provides for the newly named School Improvement Funds program, which can be tapped for school leadership efforts. Another key ESSA feature is that it opens Title II "human-capital" management funding--once targeted only at teachers--at school leaders, too. Those seeking funding need to be mindful that ESSA authorizes federal spending in a number of programs only for activities supported by evidence of effectiveness. The law further categorizes acceptable evidence into four tiers, arrayed by the level of certainty of the evidence. The evidence rules vary by program and in some cases the state may waive them. But for Title I School Improvement Funds, it is clear that only activities backed by the top three tiers qualify for funding. In reviewing research literature, RAND identified 19 school leadership-related studies that fit into Tier I, II or III--including those pertaining to principal preparation and professional development. 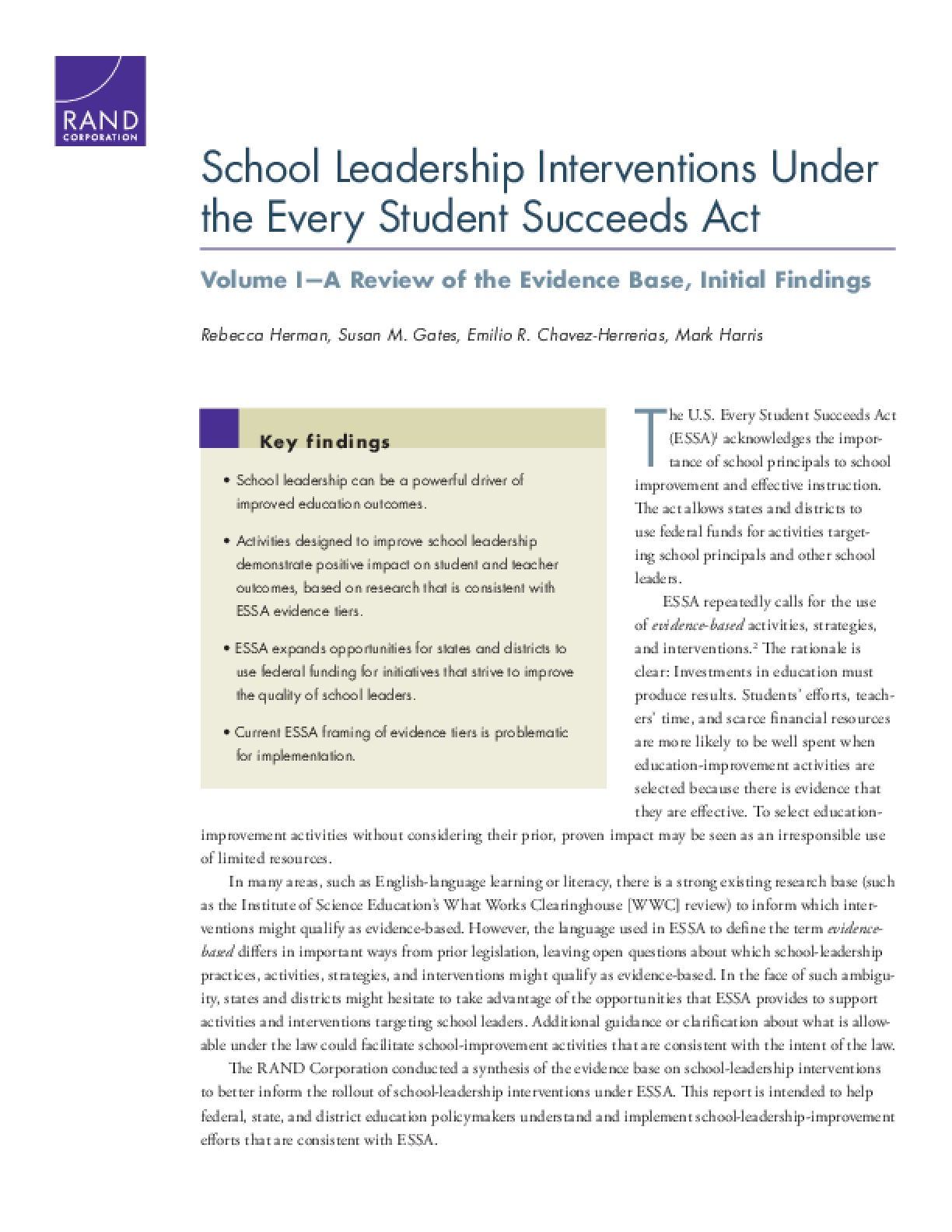