A study by the Rennie Center for Education Research and Policy finds that English language learners (ELLs), a rapidly growing percentage of the Commonwealth's student population, are qualifying for transition into mainstream classrooms at a much slower pace than originally expected. The report examines the evolution of policies and practices affecting ELLs since the passage of Question 2 in November 2002. Question 2 mandated English immersion as the primary means of instruction for most ELLs and compelled schools to expedite the transition of students to mainstream classes. While Question 2 sought to limit English learners' immersion experience to a "period not normally intended to exceed one school year," federal Civil Rights legislation trumped Question 2 and mandated that students could not be re-classified out of ELL status until they can "participate meaningfully" in English-only classes. The Rennie Center's report examines whether expectations for an expedited transition process have been met and explores the ways in which the state Department of Education and schools and districts have tried to make sense of the conflicting mandates on what constitutes an adequate amount of time for a student to become proficient in English. Data from the Massachusetts English Proficiency Assessment (MEPA), a test designed to gauge the progress of English language learners, shows that after one year of English immersion only 17% of ELLs score at levels indicating they are ready to transition to mainstream classrooms. Among ELLs who have been in Massachusetts' schools for five or more years, only slightly more than half score at the transitioning level. The report also found that schools throughout Massachusetts have developed diverse ways of interpreting and implementing sheltered English immersion. At a time of national debate about the status of immigrants and sharp increases in the numbers of non-English speakers in cities and towns across the Commonwealth and nation, it is critical that public schools focus greater attention on the issue of how best to meet the needs of English language learners. The report cites that while ten years ago only slightly more than half the school districts in Massachusetts enrolled ELLs, today that proportion has soared to nearly three-quarters. The number of districts enrolling one hundred or more English language learners has risen 37% in the past decade. As the number of English language learners continues to rise, their performance persistently lags far behind that of native English speakers. According to the Rennie Center's report, ELLs scored below the median at every grade level in every subject on the Massachusetts Comprehensive Assessment System (MCAS). Further, ELLs are 57% less likely than their native English-speaking peers to earn the competency determination needed to graduate from high school. Both the No Child Left Behind legislation and the Massachusetts Education Reform Act require schools to ensure that ELLs meet the same performance standards as their native English-speaking counterparts. According to report authors, "That we are so woefully far from that goal should be cause for alarm and action." The Rennie Center's study seeks to shed light on this issue by providing an analysis of policies and practices affecting ELLs in Massachusetts over the past five years and examining the state role in promoting improved practice. The report includes case studies of three schools that are making significant strides with large populations of English language learners and highlights common elements that the three schools have utilized to successfully meet the needs of English language learners. For example, each school studied offered multiple types of programs to accommodate the needs of students at varying levels of English proficiency, rather than a one-size-fits-all approach. Case study schools also developed a staged transition process that provided vital support as students moved into mainstream classes. Next Steps at the State and District Levels In a series of recommended next steps, the report urges state policymakers to And schools and districts to: The report, Seeking Effective Policies and Practices for English Language Learners, was released at a public event on May 31, 2007 in Marlborough, MA. 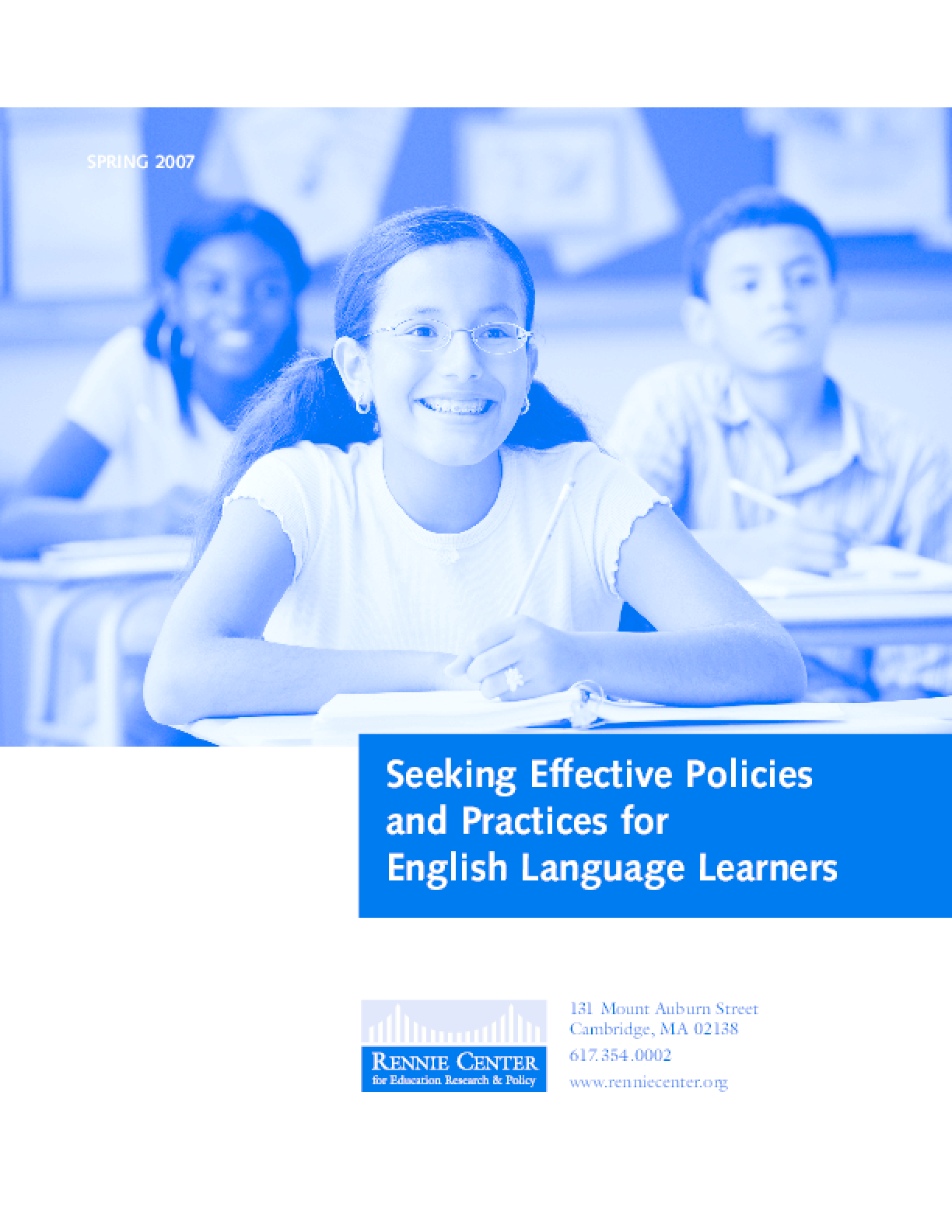