Severing the Tie That Binds: Why a Publicly Funded, Universal Health Care System Would Be a Boon to U.S. Businesses

Today, about 90 percent of people in the United States who have private health insurance receive it through employer-group plans, with the other 10 percent purchasing their insurance on the individual market. Meanwhile, the health care system that employers largely pay for is staggeringly expensive and way out of proportion with the cost of those of other wealthy countries.

Even by a conservative methodology that adjusts for countries' relative wealth (thus taking into account the higher typical compensation in the United States), health care spending in the United States in 2006 was $643 billion more (out of $2.1 trillion in total expenditures) than it should have been if other developed countries were used as a guide, according to the McKinsey Global Institute. More recent data (not corrected for relative wealth) show that the United States spent nearly 1.5 times more on health care as a share of gross domestic product than any other country in the Organization for Economic Co-operation and Development (OECD) in 2011 (the most recent year for which comprehensive data are available.) On a per capita basis, the United spent two-and-a-half times as much on health care as the average OECD country that year.

Not surprisingly, businesses view the cost of providing health care benefits as an enormous burden. In each of eight surveys the National Federation of Independent Business has conducted of its members since 1982 on problems facing small businesses, respondents have ranked the "Cost of Health Insurance" number one.Our system disadvantages businesses that provide health insurance benefits relative to those that do not because they directly and indirectly end up subsidizing the costs of health care services received by people they do not employ. Further, in a circumstance that often afflicts small businesses, employers that offer health care benefits suffer a cost disadvantage against competitors that do not, although they might realize offsetting advantages through improved ability to attract and retain qualified workers.

Our health care system also imposes a disadvantage on large U.S.-based businesses because their international competitors do not face nearly as significant of health care costs. For instance, as the U.S. automakers' losses mounted amid the recession of 2007, a study revealed that $1,635 was built into the price of every General Motors vehicle just to pay for health care benefits for GM's employees and retirees. Japan-based Toyota, in contrast, was paying just $215 per vehicle for current employees' health care and nothing for retirees.

The tie between employment and health insurance causes numerous other distortions in the economy. Perhaps the most prominent of these is a phenomenon known as "job lock." This widely accepted theory posits that employees are reluctant to switch jobs or, especially, to pursue ventures involving self-employment and entrepreneurship out of fear of losing their access to health care. More broadly, job lock may be slowing the rate of economic growth, thereby reducing businesses' pool of potential customers.

A publicly funded, universal health care system in the United States (or, to a lesser extent, within individual states10) would address many of these problems. By snapping the tie between employment and health insurance, health insurance-based job lock would no longer exist. Meanwhile, the overall costs of health care would likely stabilize due to many factors, chiefly that administrative costs would be reduced and abusive pricing would be policed. 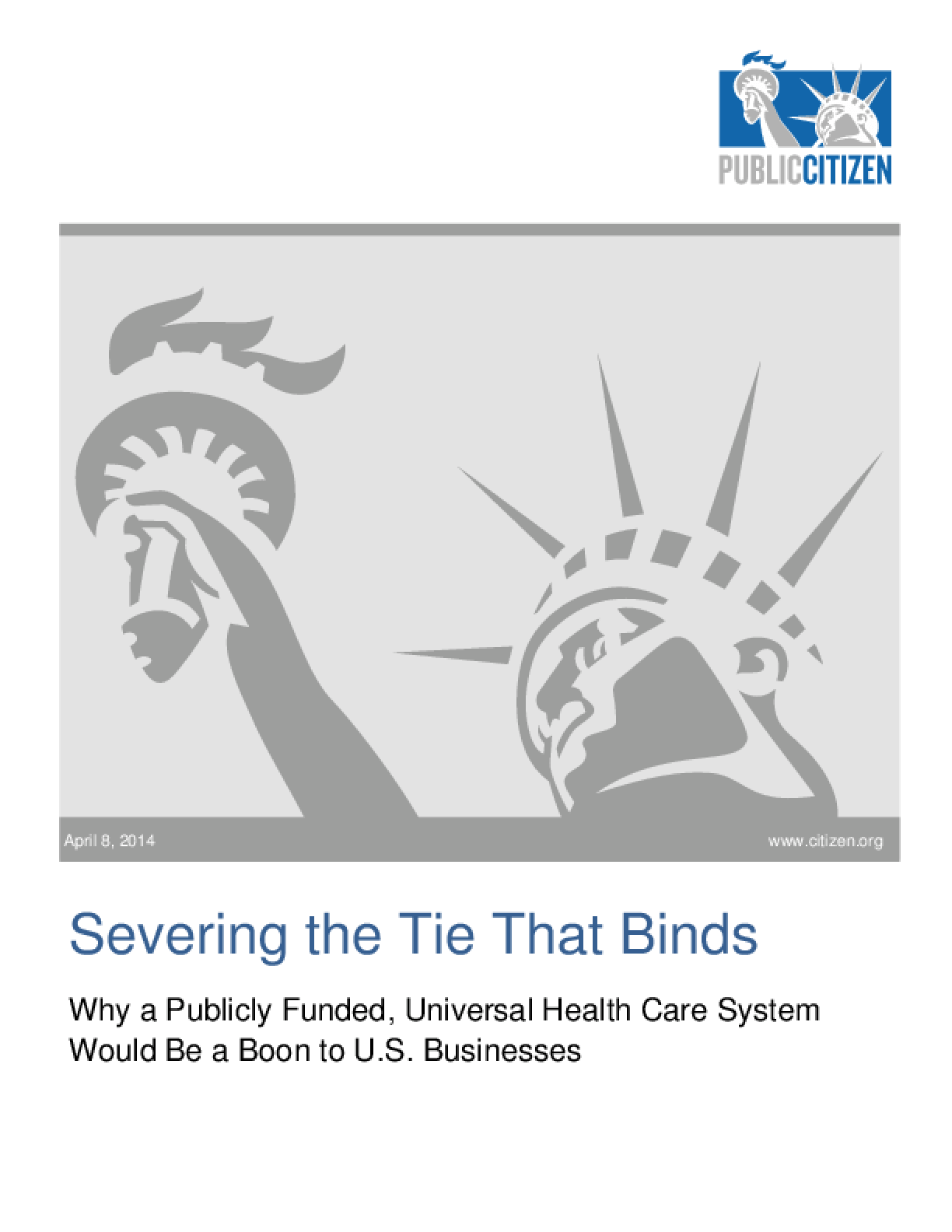