Statement on the EU’s Role in Addressing the DRC Crises

The conflict in eastern Congo between the government of the Democratic Republic of the Congo (DRC) and the Rwandan and Ugandan-backed M23 rebel group is crippling the Great Lakes Region.

The current security crisis is in large part due to the national crisis in governance in the DRC. The European Union has a key role to play in responding to both.

The government of DRC is clearly unable to deal with the threat on its eastern borders, because of its failure to reform its weak and undisciplined army, as well as other critical institutions such as the justice system.

Relations with regional actors are exacerbating the internal situation. Recent reports suggest that Rwanda and Uganda, emboldened by the failure of the international community to hold them accountable for their previous aggressions, have continued to provide military, logistic, and political support to M23. At the same time, both countries have influenced discussions at the International Conference on the Great Lakes Region, recommending the deployment of a "neutral" regional force on Congolese soil.

The Southern Africa Development Community has suggested a military response that would include actors who previously participated in conflicts in the DRC. However, an emphasis on security and a military solution can only provide a partial response to the crisis.

A new political process is needed to prevent further violence and pave the way for durable peace in the DRC and in the region. New negotiations at provincial, national and regional levels are necessary to determine responsibilities as well as indicate clear benchmarks to ensure a sustainable solution. A credible, internationally facilitated process, whose participants have the commensurate experience and stature to act above the regional mistrust that is the hallmark of local processes, would bring the necessary parties into a constructive dialogue. The recently appointed African Union (AU) Special Representative could be usefully complemented by a UN-mandated mediation process or the appointment of a group of wise-men to support African-led conflict resolution efforts.

The process should focus as a matter of priority on the disarmament of all rebel combatants, and in the longer-term on addressing the systemic drivers of conflict in the region. The grievances of the people of DRC in relation to their government's failure to invest in credible and sustained reforms for accountable and responsive state institutions should be at the heart of any response. Military integration processes that would integrate military spoilers without listening to the affected communities, as happened with the 2009 Goma Agreement, must be avoided. M23 soldiers responsible for serious crimes should be barred from the Congolese army.

The European Union is in a position to support the establishment of this process and re-assess its own immediate, medium and longer term responses. 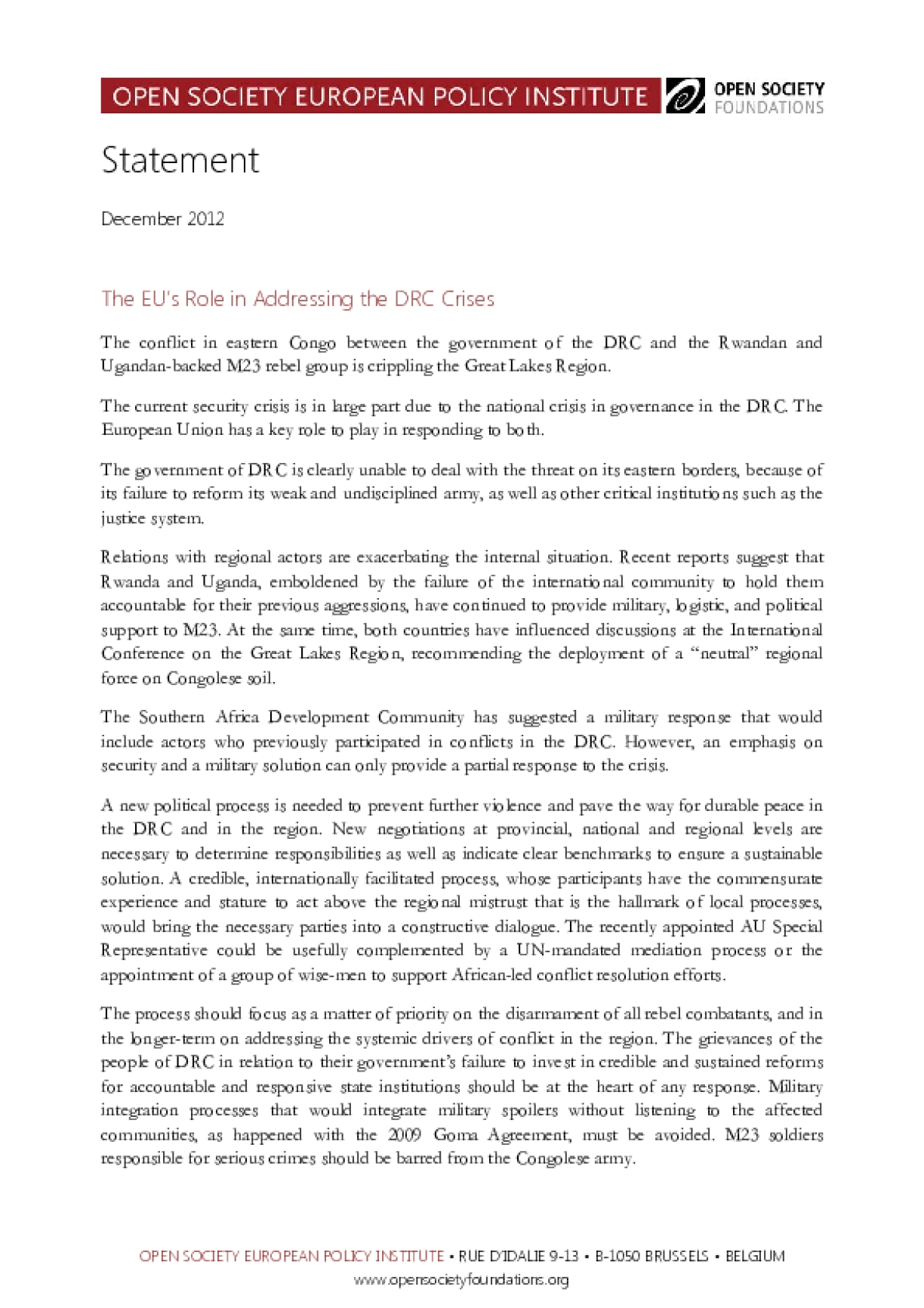