Cars, not people, will claim most of the increase in world grain consumption this year. The U.S. Department of Agriculture projects that world grain use will grow by 20 million tons in 2006. Of this, 14 million tons will be used to produce fuel for cars in the United States, leaving only 6 million tons to satisfy the world's growing food needs. In agricultural terms, the world appetite for automotive fuel is insatiable. The grain required to fill a 25-gallon SUV gas tank with ethanol will feed one person for a year. The grain to fill the tank every two weeks over a year will feed 26 people. Investors are jumping on the highly profitable biofuel-bandwagon so fast that hardly a day goes by without another ethanol distillery or biodiesel refinery being announced somewhere in the world. The amount of corn used in U.S. ethanol distilleries has tripled in five years, jumping from 18 million tons in 2001 to an estimated 55 million tons from the 2006 crop. In some U.S. Corn Belt states, ethanol distilleries are taking over the corn supply. In Iowa, a staggering 55 ethanol plants are operating or have been proposed. Iowa State University economist Bob Wisner observes that if all these plants are built, they would use virtually all the corn grown in Iowa. In South Dakota, a top-ten corn-growing state, ethanol distilleries are already claiming over half of the corn harvest. 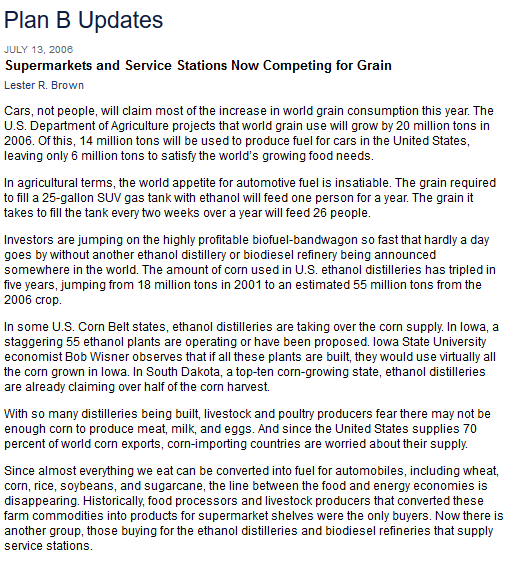