The Choice is Yours: How Pension System Decisions Might Shape the Teacher Workforce

Current interest in teacher pension reform stems from the poor financial condition of many states' pension systems. The costs of these systems were not fully capitalized into the cost of education in the past, which is putting pressure on current finances, and policy-makers may wantto reduce the likelihood of this occurring in the future. Moreover, there are concerns that many states' traditional defined benefit plans may not distribute compensation in a way that optimally attracts and retains the best teachers. In considering pension reforms, such as shifting towards defined contribution structures, it is important to gain insights into teachers' preferences for different types of plans. Washington State's experience of creating a hybrid pension plan can provide useful information to policy makers dealing with these issues. The "big picture" policy implication of the experience in Washington State is that teacher pension systems can be reformed in a way that is attractive to both teachers and states. The proportion of teachers choosing to transfer to the hybrid plan (75 percent) or enroll as a new hire (60 percent) suggests that there was substantial win-win territory to be taken by restructuring the pension system. As stated previously, creating a new pension system does not by itself reduce unfunded liabilities associated with an existing DB system. However, a state can reduce the financial risk associated with its exposure to those liabilities by inducing employees to voluntarily transfer to the new system. Our analysis of the 1997 transfer decision illustrates a situation in which a large proportion of teachers in a traditional DB plan were willing to transfer to a hybrid pension system, and that the decision to transfer was influenced by financial incentives and factors related to risk preferences (particularly age and income). While these findings cannot be generalized to hybrid plans as a whole (we only observe choice between two specific plans), they do indicate the potential to induce a large proportion of transfersto a suitably structured plan.Our analysis of pension choice among new hires in the 2007 choice cohort indicates that a popular hybrid pension plan can be created at comparable cost to a traditional DB plan and with lower financial exposure for taxpayers. Excepting teacher age, new hires' pension preferences were not related to observable teacher and work-environment characteristics. It appears unlikely that the introduction of TRS3 significantly altered the composition of the teacher workforce interms of attracting new hires. Furthermore, we find no evidence that transitioning to the hybrid system negatively affected the quality of the teacher workforce. In fact, more effective teachers were slightly more likely to choose the hybrid plan. As unfunded pension obligations compete for many state's current education dollars, there is likely to be increasing pressure to enact reforms that will prevent the recurrence of such problems in the future. Given the stakes involved, pension reform is inevitably a contentious process, but the findings from Washington State suggest changes can be made to pension systems that make both teachers and taxpayers better off. 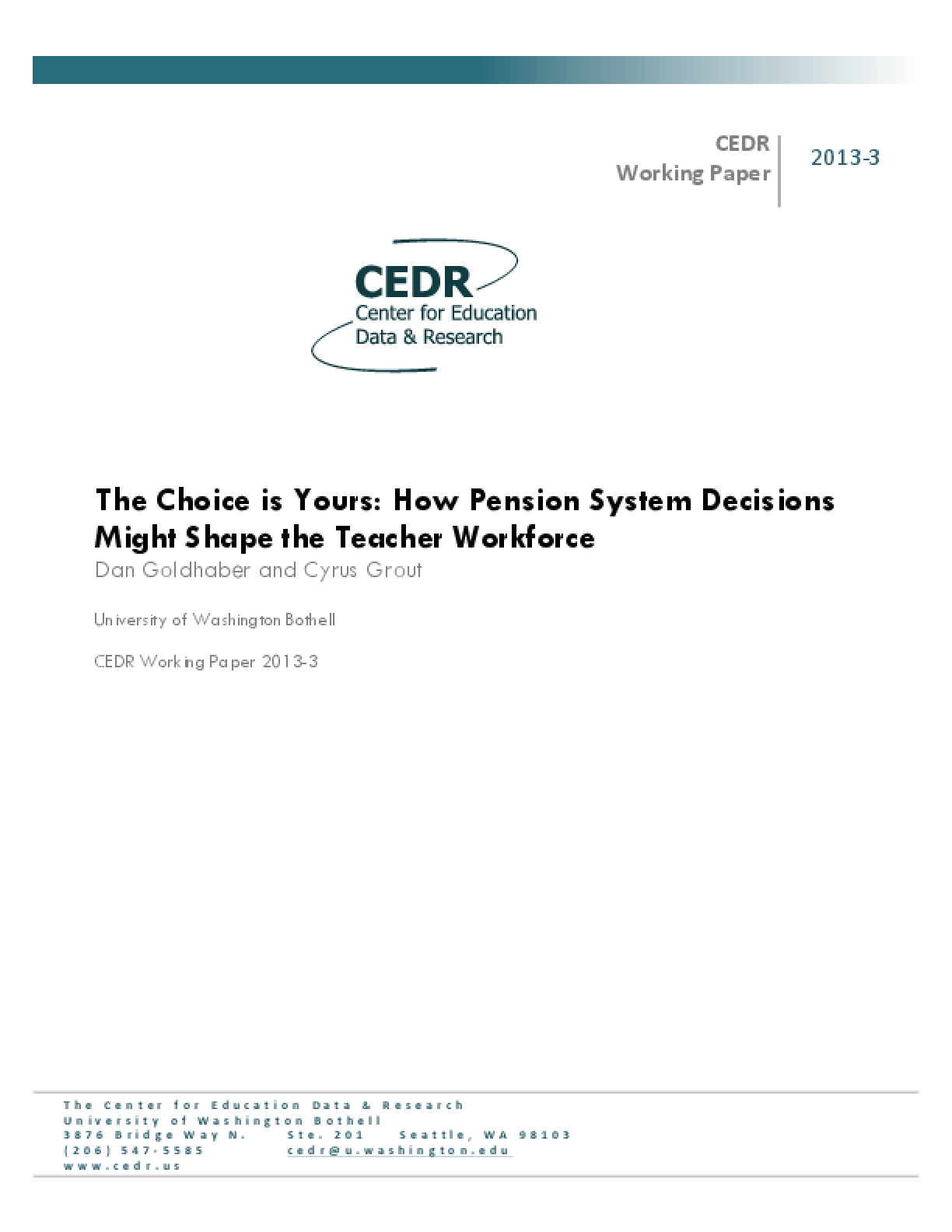