The Municipal Transfer System in Nicaragua: Evaluation and Proposals for Reform

For almost 20 years, the Nicaraguan authorities have been implementing a fiscal decentralization process to devolve an increasing degree of autonomy to municipalities. As a part of this process, and mainly due to the efforts of the Association of Municipalities of Nicaragua (AMUNIC is the acronym in Spanish), the first municipal transfers were approved in just 1999. Later, the funds available for the municipalities were increased gradually as a percentage of the General Budget (PGR), until in August 2003 the new Law of Municipal Transfers set this percentage at 4% of the total central government tax revenues in 2004, and stated that it should be increased at least by 0,5% per year up to 10% of the PGR in 2010. In 2005 the transfer program corresponded to 5% of the PGR, whereas in the present year the percentage increased to 6%. The Law of Municipal Transfers defines five targets for the municipal transfer program: 1) to promote the development of the diverse parts of the national territory; 2) to reduce the imbalance between the capacity to raise revenues and the cost of public service provision at the municipal level; 3) to stimulate local revenue collections and efficiency in municipal management; 4) to make possible the management and implementation of local policies of development and to allow local governments to administer national policies and development programs against poverty; and 5) to contribute to increased transparency in local management. In order to reach these objectives, the Law of Municipal Transfers also establishes four fundamental criteria to compute the amount of municipal transfers: 1) Fiscal Equity, meant to reduce the horizontal imbalances between municipalities; 2) Efficiency (or Fiscal Effort) in the collection of property taxes (IBI), meant to stimulate IBI collections with respect to the potential revenues in each municipality; 3) Population, which responds solely to the number of inhabitants of each municipality; and 4) Execution of transfers, which rewards the full disbursement of capital transfers. According to the Law of Municipal Transfers, Managua is entitled to 2,5% of the transfer fund, whereas 97,5% is distributed among all other municipalities in accordance with the four criteria. Each distribution criterion is weighted equally, and so the 97,5% of the transfer fund is divided by four and the total transfers for each municipality consist of the sum of the transfers received by each criterion. The potential per capita tax revenues, required to assign the transfers by Fiscal Equity has been calculated so far on a historical basis and now the authorities are considering the introduction of a new methodology, the MDPTM, developed and applied by the Boston Institute for Developing Economies (BIDE). The determination of the potential IBI collection, required to assign the transfers by Fiscal Effort, would also depend on this model. Although the MDPTM would constitute a great improvement with respect to the methodology used in the present, it is also a complex model that requires a great deal of information. In any case, even if the application of the MDPTM is feasible in the immediate future, the proposals provided in this report could easily incorporate its estimations. Working Paper Number 07-08 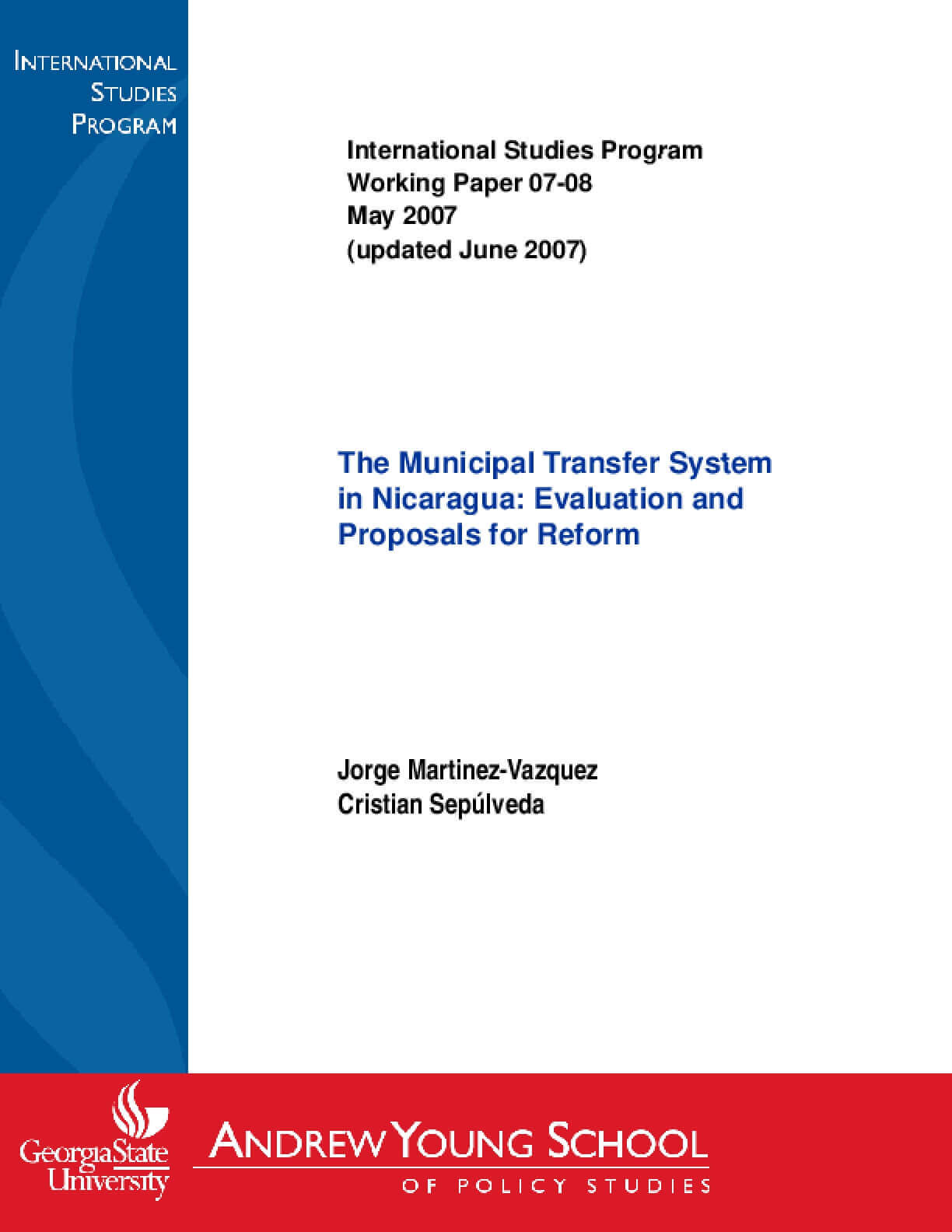