The Shackling of Incarcerated Pregnant Women: A Human Rights Violation Committed Regularly in the United States

The international human rights community has repeatedly expressed concern about the shackling of pregnant women deprived of their liberty in the United States. The federal government has adopted an anti-shackling policy and some states have passed laws or policies restricting shackling. Despite these positive developments, shackling of women prisoners continues to occur in violation of U.S. and international law. Shackling pregnant women increases the substantial medical risks of childbirth. Shackling of pregnant women is a harmful, painful, and demeaning practice that is rarely necessary to preserve safety. Most female prisoners are non-violent offenders, and women who are pregnant, in labor, or in postpartum recovery are especially low flight and safety risks. Both international law and U.S. constitutional law prohibit shackling during certain stages of pregnancy, childbirth, and post-partum recovery. Article 10 of the International Covenant on Civil and Political Rights (the "ICCPR") guarantees that persons deprived of their liberty be treated with dignity and respect. Article 7 prohibits torture, or cruel, inhuman, or degrading treatment or punishment. The Eighth Amendment to the U.S. Constitution prohibits cruel or unusual punishments, which some Federal courts have interpreted to prohibit the shackling of pregnant prisoners during childbirth. While the U.S. federal government has adopted an anti-shackling policy that applies to federal prisons and 24 states have adopted policies limiting (to varying degrees) shackling of pregnant prisoners, legislation enacted by state legislatures is preferable to the adoption of an administrative policy by the executive. Indeed, 18 state legislatures in the United States have in fact passed legislation restricting shackling, but many such laws contain broad exceptions or are not adequately implemented. We recommend that the UN Human Rights Committee (the "Committee") that monitors compliance with the ICCPR ask and encourage the United States to 1) enact a federal law banning the practice of shackling prisoners during pregnancy, covering, at a minimum, the third trimester, transport to medical facilities, labor, delivery and postpartum recovery, 2) take appropriate measures to ensure that those 32 states that do not have anti-shackling laws to enact comprehensive laws, including training of correctional officers, 3) to review existing state anti-shackling laws and policies to ensure that they are comprehensive and fully-implemented, and 4) to conduct an empirical study to determine the scope of shackling in U.S. prisons and to understand why the practice of shackling pregnant women persists. 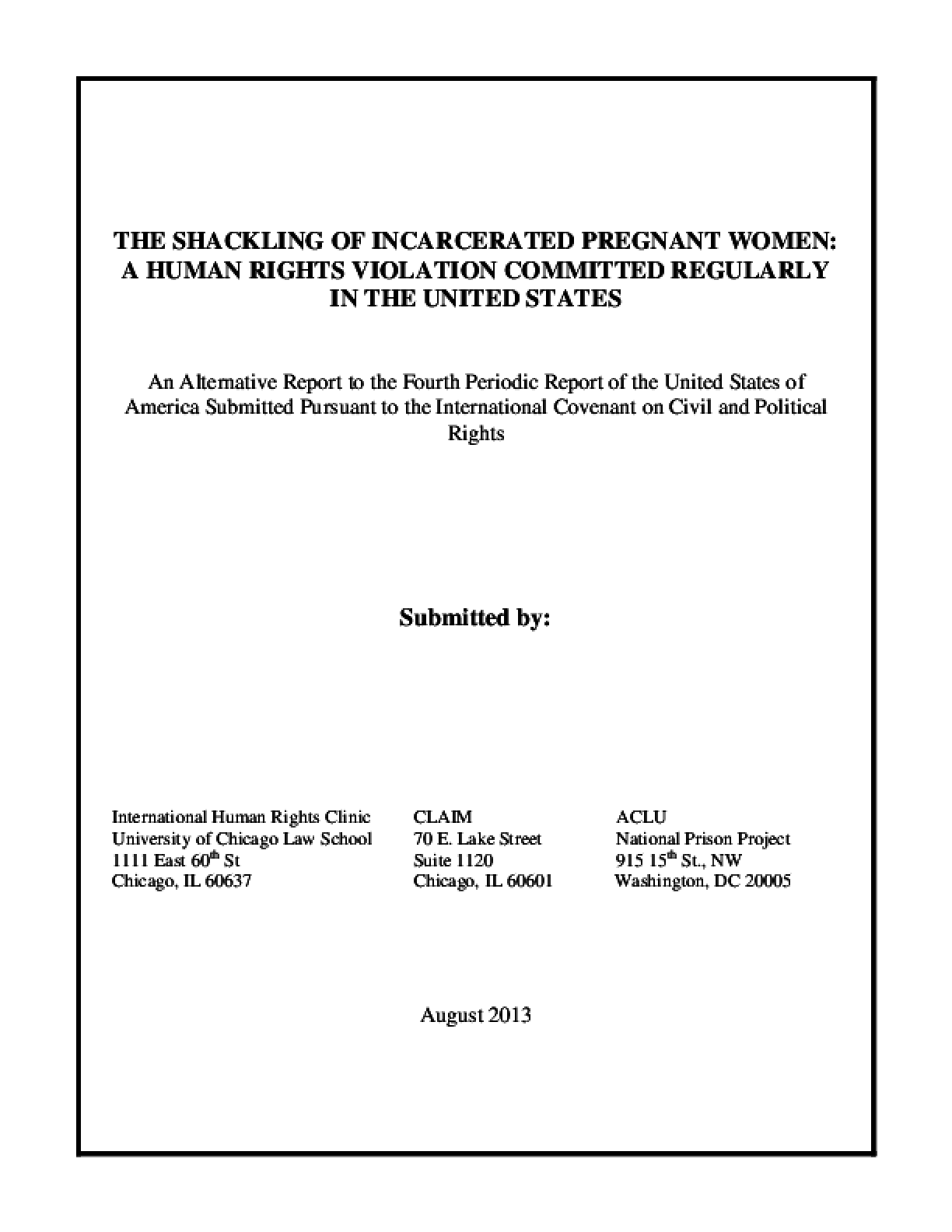