Time for Plan B: Cutting Carbon Emissions 80 Percent by 2020

When political leaders look at the need to cut carbon dioxide emissions to curb global warming, they ask the question: How much of a cut is politically feasible? At the Earth Policy Institute we ask a different question: How much of a cut is necessary to avoid the most dangerous effects of climate change? By burning fossil fuels and destroying forests, we are releasing greenhouse gases, importantly carbon dioxide (CO2), into the atmosphere. These heat-trapping gases are warming the planet, setting in motion changes that are taking us outside the climate bounds within which civilization developed. We cannot afford to let the planet get much hotter. At today's already elevated temperatures, the massive Greenland and West Antarctic ice sheets -- which together contain enough water to raise sea level by 12 meters (39 feet) -- are melting at accelerating rates. Glaciers around the world are shrinking and at risk of disappearing, including those in the mountains of Asia whose ice melt feeds the continent's major rivers during the dry season. Delaying action will only lead to greater damage. It's time for Plan B. The alternative to business as usual, Plan B calls for cutting net carbon dioxide emissions 80 percent by 2020. This will allow us to prevent the concentration of CO2 in the atmosphere, already at 384 parts per million (ppm), from exceeding 400 ppm, thus keeping future global temperature rise to a minimum. Cutting CO2 emissions 80 percent by 2020 will take a worldwide mobilization at wartime speed. First, investing in energy efficiency will allow us to keep global energy demand from increasing.Then we can cut carbon emissions by one third by replacing fossil fuels with renewable energy sources for electricity and heat production. A further 14 percent drop comes from restructuring our transportation systems and reducing coal and oil use in industry. Ending net deforestation worldwide can cut CO2 emissions another 16 percent. Last, planting trees and managing soils to sequester carbon can absorb 17 percent of our current emissions. None of these initiatives depends on new technologies. We know what needs to be done to reduce CO2 emissions 80 percent by 2020. All that is needed now is leadership. The full report is available in pdf without endnotes or with endnotes. 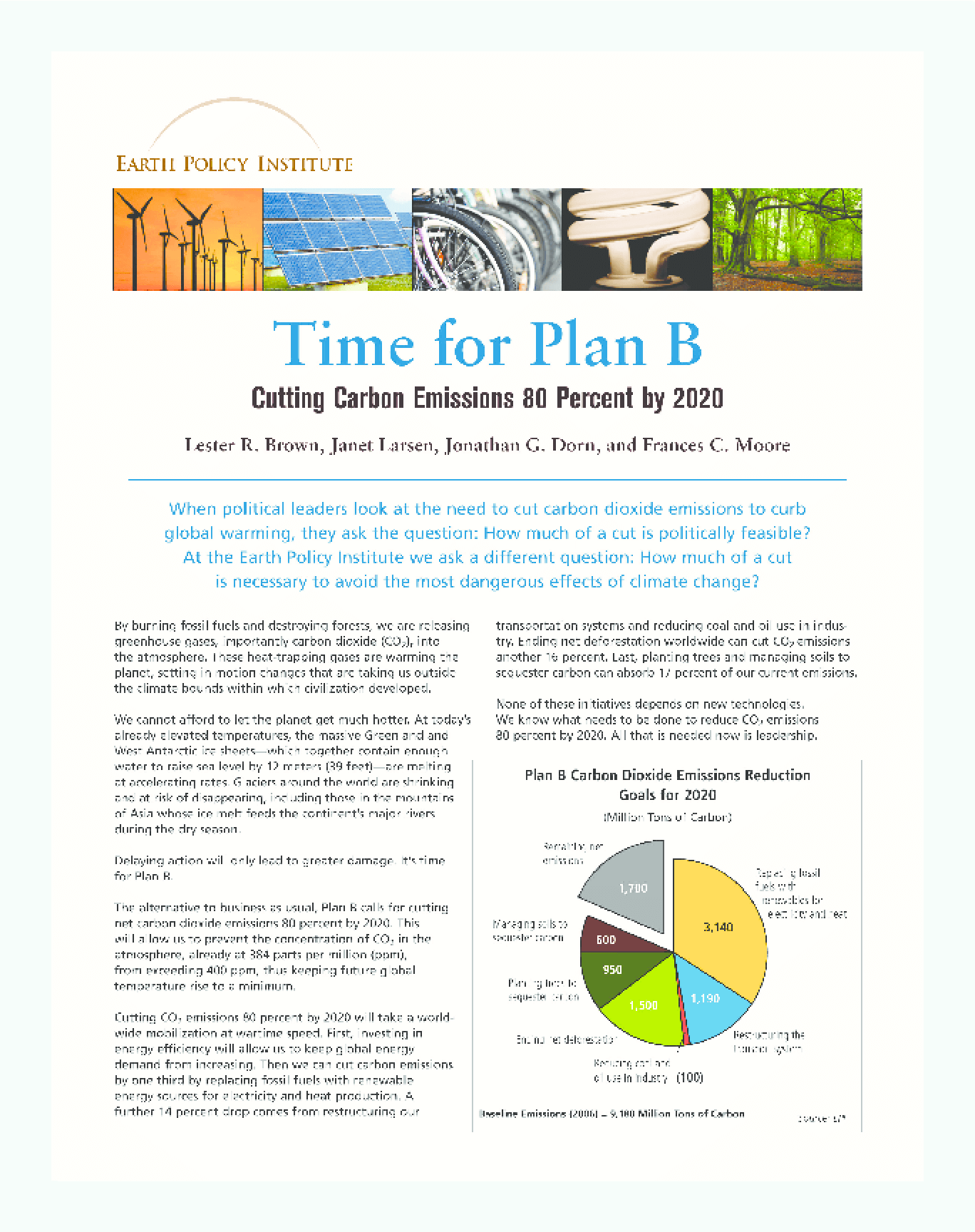