Trust in Government in the Trump Era: A Comprehensive Study of U.S. Public Opinion on the Federal Government Under the Trump Administration

The election and presidency of Donald Trump has upended American politics in numerous ways. For his most ardent supporters, President Trump's efforts to change things in Washington; to deliver nationalist economic policies on trade, jobs, and immigration; and to advance culturally conservative rhetoric and racial appeals are worth the break with past presidential behavior and national unity. For his detractors, the actions of Trump and his administration represent a serious abrogation of presidential norms and mark a dangerous shift away from pluralist democracy and toward more authoritarian nationalism. Many other voters with less intense feelings about Trump are just trying to put the whole spectacle out of their minds and to find some semblance of normalcy in a politically fractured environment. For those who study public attitudes about government itself, the Trump presidency raises serious questions about whether the United States is experiencing real, long-lasting changes in voters' attitudes toward government, or if Americans are reacting in intense but more typical ways that are consistent with past trends. To examine these issues in more detail, the Center for American Progress, along with its colleagues at Hart Research Associates, designed a comprehensive national survey to measure basic beliefs about government and specific voter attitudes about the Trump administration. The online survey of 1,500 registered voters nationally was conducted March 19–25, 2018, and has an overall margin of error of +/- 2.6 percent. This study builds upon a major public opinion study that CAP and Hart conducted in 2015, which examined public attitudes about government and explored a variety of proposals for improving the performance and representation of the government in Washington. The results of that research are summarized in the unpublished May 2016 report, "Of the People, By the People, For the People? A National Study of Public Trust and Confidence in Government."1

Based on the results of the current study and comparisons with earlier responses from the 2015 research and other publicly available data, we believe that reactions to the Trump administration represent a genuine break with past public views of government in significant ways. Most importantly, the partisan divisions on measures of trust and confidence in government found in earlier research are now fully solidified. Many American voters today are not basing their evaluations of government on objective criteria that weigh policy choices and overall performance in a neutral manner. Rather, in-party and out-party voters are reacting in entirely divergent ways to the government itself based primarily upon who is leading the government and which party is in control. 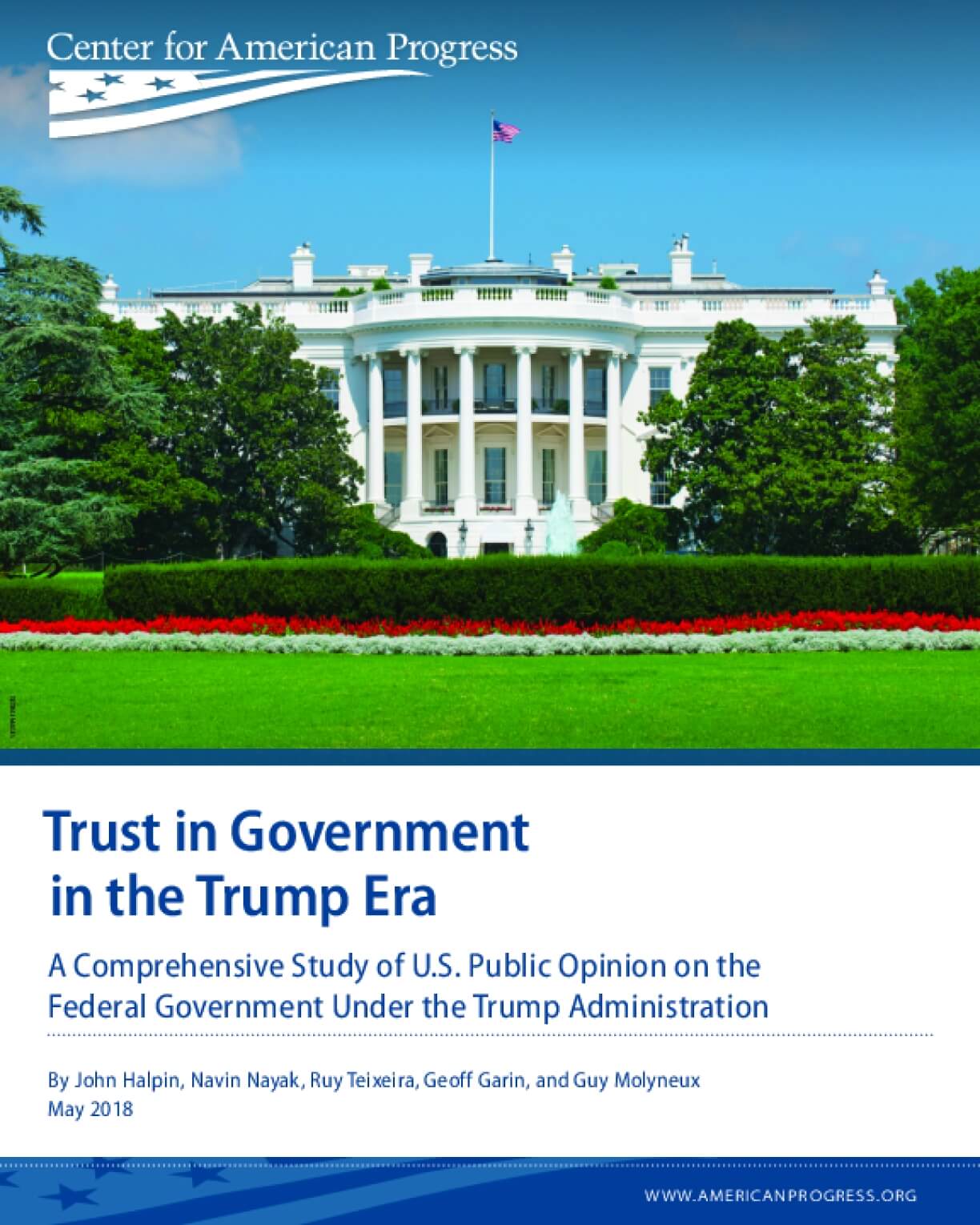