The close geographical proximity of San Diego and Tijuana, the stark contrast between their distinct economies and levels of socio-economic development, and the ease and magnitude of cross-border exchange between these two metropolitan areas, demand our undivided attention. According to the San Diego Association of Governments (SANDAG), over 60 million persons cross into San Diego from Tijuana at the San Ysidro border crossing each year. In fact, many have come to agree that the San Diego-Tijuana border region does not identify with one particular country, but rather has a broader identity of its own. The blending of economic, social and cultural activities in this region charges us to find bi-national solutions to the unique bi-national issues facing the region. One such regional issue we must confront is that of tuberculosis (TB). Both California and Baja California have TB incidence rates that are much higher than the national rates of their respective countries. Furthermore, Tijuana reports approximately 4 times as many new TB cases per year than does San Diego. There is an urgent need to confront this disparity, and address the issue of bi-national TB control in the San Diego-Tijuana border region to find sustainable, community-based solutions that will benefit both Mexico and the United States. Importantly, as an air-borne infection, successful models of TB control will have applicability to other emerging diseases threats that require cross-border solutions, such as H1N1.

TB is a subtle and complex chronic infectious disease that can remain dormant for years after the initial infection. Once active or reactivated, TB often takes weeks or months to be diagnosed correctly, allowing for ongoing exposure and transmission to others. The World Health Organization (WHO) estimates that 2 billion people, or one-third of the global population, are currently infected with the M. tuberculosis bacilli. Of those infected, it is estimated that 1 in 10 will develop the active, contagious form of disease at some time in their lives, and those with active TB will infect an average of 10 to 15 people per year if they are not treated. Likely an underestimate, over 600 cases of pulmonary TB were confirmed and reported annually in Tijuana in 2006 and 2007 with an overall rate of 46 per 100,000 inhabitants, which is substantially higher than rates in neighboring Mexican states. In the last decade, there has been an average of over 300 new TB cases per year in San Diego County, of which nearly 40% were born in Mexico. This estimate is likely to understate the influence of Mexico on the TB case load in San Diego, since USborn, Hispanic TB cases are not identified in TB surveillance data as being of Mexican origin. Nevertheless, these cases have significant interaction with Mexico when they, or their contacts, cross the border for social, cultural and economic reasons. Prior to the discovery in 1946 that streptomycin cured TB, the disease claimed the lives of half its victims. Hopes of eradicating TB grew when a 6-month course of daily drug treatment was found to be highly effective for curing TB and rates of disease began to drop worldwide. However, interrupted or inconsistent treatment, combined with the AIDS epidemic, led to the emergence of drug resistant strains of TB bacteria that could no longer be cured with first-line antibiotics, and rates of TB began to increase in the 1980s. To date, the WHO and other agencies have documented cases of TB that are resistant to standard first-line antibiotics and second-line antibiotics in all regions of the world, including the US-Mexico border region. This reverses years of progress in TB control as successful management of drug resistance requires more sophisticated laboratory capacity, educated personnel and access to significantly more expensive drugs. Importantly, drug resistance is completely preventable with appropriate diagnosis that includes drug sensitivity testing and programs like directly observed therapy (DOT) that ensure patients are on proper treatment regimens and do not interrupt therapy or miss doses. Until a vaccine or single-dose treatment is discovered, our best hope for preventing TB from returning to an untreatable disease depends on accurately diagnosing and completely treating patients with TB.

Like the disease itself, the costs of TB are complex and difficult to quantify. The direct costs can be described in terms of infrastructure - diagnostic laboratories and equipment, clinic and hospital units appropriately designed for infection control, and surveillance systems; personnel - trained laboratory technicians, informed healthcare providers, DOT workers, contact investigators, and surveillance system managers; and consumables - laboratory reagents, anti-TB medications, infection control supplies, and educational materials. Indirect costs include lost wages for those infected, decreased productivity by employers, and disruption to the community affected by contact tracing activities. We estimate that TB costs in San Diego amount to be at least $21.3 million annually, which includes approximately $12.7 million in lost earnings for patients due to their disease. Beyond the loss of earned wages is the loss by San Diego employers in productivity. Workforce productivity is impacted in several ways by TB. Most significant is that TB symptoms are slow to develop and many infected individuals continue day-to-day activities for weeks or months before their disease is detected, potentially exposing large numbers of contacts at work, home and in the community to TB. This results in additional infections in the workplace and disruptions due to the extensive contact tracing activities that need to take place after a workplace infection. The costs presented here include the major measurable factors and costs to San Diego, but, while high, are certainly an underestimate of total costs. They do not include the substantial hidden costs of lost productivity to employers or other more subtle losses like loss of income to school districts due to scheduled absences for children with TB; nor do they account for other social costs related to stigmatization or infected individuals and their contacts.

Importantly, there is consensus for what constitutes a comprehensive TB control program: the WHO DOTS program. This strategy includes early detection of cases, contact tracing, accurate diagnosis through bacterial culture and drug sensitivity testing, uninterrupted access to effective drugs, and DOT. Although incidence rates are declining globally and domestically, the number of cases worldwide is increasing due to population growth and the emergence of resistance threatens to reverse the advances to date. Thus, there is an urgent call by multiple political and professional organizations for a coordinated global response. While the San Diego-Tijuana region is impacted by the growing challenges of TB, this is a preventable and treatable disease and there is tremendous potential to contribute and participate in an international mobilization of public health, clinical personnel, business leaders and communities to effectively combat the disease.

Economic analyses clearly indicate that US investment in TB control in Mexico can be a cost-effective means of controlling TB in the United States. Given the epidemiology of TB in the San Diego- Tijuana border such economic benefits are likely to be true for this bi-national region. While this is so, the active involvement of both private businesses and governmental agencies will be required to make this a reality. Successful working models in which businesses located in high TB-incidence areas have taken a lead role in TB control programs already exist through the work of member companies of the Global Business Coalition for HIV, Tuberculosis and Malaria (GBC). This novel approach to address emerging high impact threats through private-public partnerships provides a promising model that can be adopted in the US-Mexico border region. 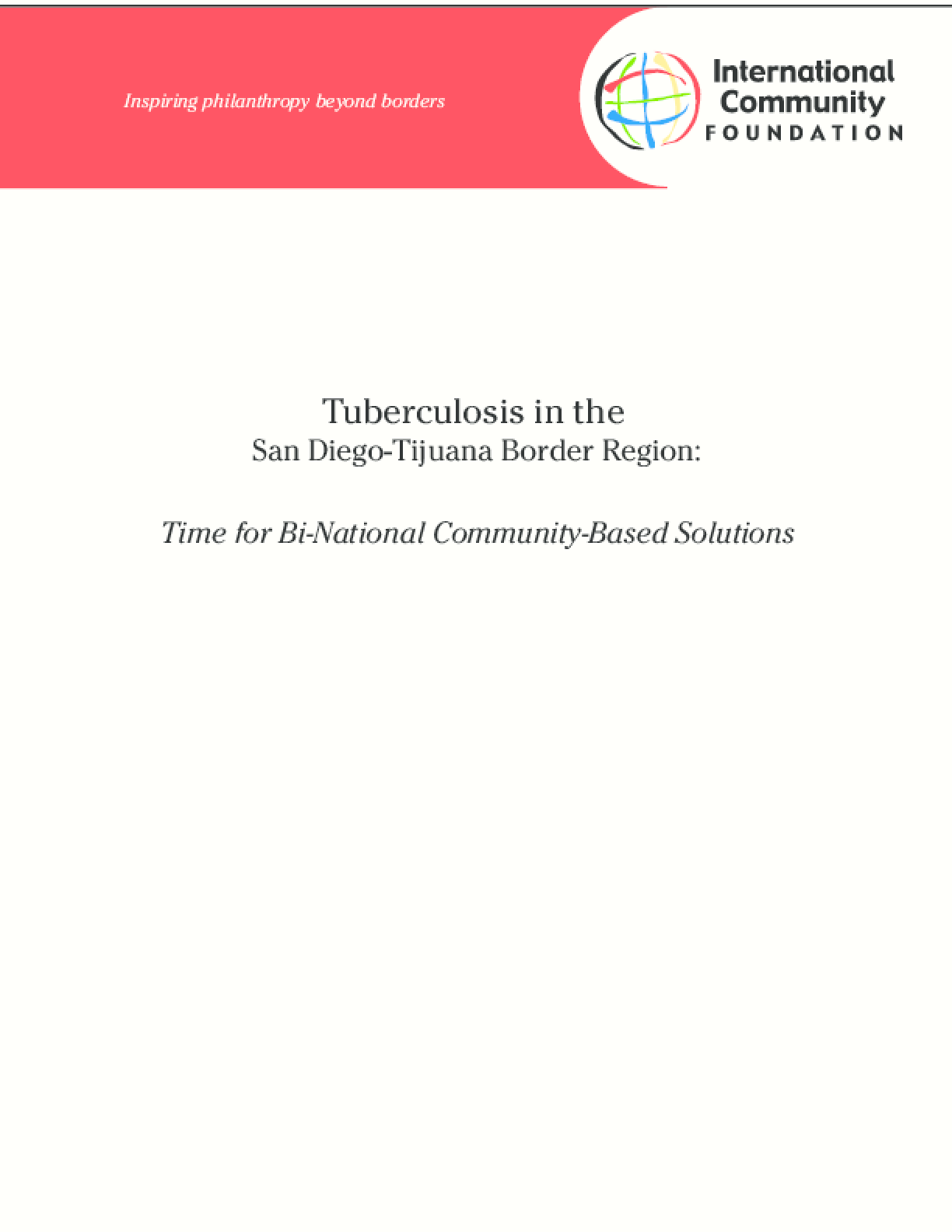