Although long ignored by education-policy analysts, the structure of teacher retirement benefits has come under increasing scrutiny in recent years. The vast majority of teachers, like other state and local public employees, are covered by traditional defined-benefit (DB) pension plans. Now rare in the private sector of the United States economy, these plans provide a retired teacher with a guaranteed lifetime benefit, the annual value of which is typically based on his number of years of service and average salary during the final years of his career. A teacher is often required to contribute from her salary to funds set aside to pay for this plan, but the size of her benefit is not tied to the amount of any contributions. Critics of existing teacher pension systems raise two broad sets of concerns. First, they note that the time lag between when the government funds and pays out retirement benefits encourages politicians to contribute too little to their pension systems, effectively borrowing from future taxpayers to fund current spending on government services.The shortfalls facing state and local pension systems covering teachers and other public workers due to persistent underfunding are staggering. Novy-Marx and Rauh13 estimate that achieving full funding of promised pension liabilities nationally over thirty years would require a tax increase of $1,385 per household each year. A more likely outcome is substantial cuts to public services such as education. Second, critics note that the reliance on traditional DB pension plans makes total teacher compensation severely back-loaded, potentially hindering efforts to improve teacher quality. Most of these plans have vesting periods of five or more years and are structured so that employees do not amass substantial benefits until late in their careers -- at which point benefits increase rapidly. These features may make teaching less attractive to individuals who are uncertain of whether they will remain in the profession long enough to benefit or would prefer to receive a higher salary to support present consumption. Recent evidence confirms that DB pension plans lead some veteran teachers to continue teaching solely for the sake of increasing pension wealth, while encouraging others to retire prematurely so as not to sacrifice years of benefit payments. The back-loading of benefits also imposes heavy costs on career-switchers and geographically mobile teachers, who typically stand to receive benefits worth far less than the pension contributions made on their behalf. The most prominent alternative to a traditional DB pension plan is the defined contribution (DC) model. Under DC plans, an employee builds up an individual retirement account through her or her employer's regular contributions throughout her career and exercises some control over how the account is invested. Because the value of that account is tied directly to these contributions (and the performance of investments), DC plans, by definition, cannot be underfunded. Rapidvesting, portability, and the smooth accrual of benefits over time eliminate the problematic end-of-career incentives created by existing DB plans and could make teaching more attractive to young workers, possible career-switchers, or those likely to be geographically mobile. Finally, because benefits take the form of a personal account that can be converted into a lifetime annuity, the employee gains control over the timing and structure of her retirement benefit. An important potential drawback of the DC model is that employees, rather than taxpayers, bear the consequences if disappointing investment returns or poor withdrawal decisions yield inadequate retirement savings. Unions representing teachers and other public employees have vigorously opposed proposals to convert public pension plans to the DC model, largely on these grounds. Proponents of DB pensions cite survey data suggesting that public employees strongly prefer the DB model and contend that "when given the choice between a primary DB or DC plan, public employees overwhelmingly choose the DB pension plan." Yet there is reason to believe that many current and potential teachers could find well-designed DC plans as or more attractive than traditional DB plans. As noted above, DB plans typically provide minimal benefits to those who do not remain in the profession (and in the same state retirement system) for many years. They may therefore be unappealing to a younger generation of workers prone to exploring multiple career paths before settling on one. Other teachers may simply prefer to exercise greater control over their retirement savings, either due to confidence in their investment abilities or to doubts as to whether public pension funds will be able to deliver on their promises. Consistent with this logic, a survey of Washington State teachers found that a plurality of teachers would prefer to invest additional retirement savings in a DC plan rather than in a DB plan. The extent to which preferences expressed on surveys correspond to the actual behavior of teachers when given the option remains unclear. In this paper, we examine teacher preferences as revealed by their decisions when empowered to choose between alternative pension-plan structures. Since 2002, public school teachers (and most other state and local employees) in Florida have been permitted to choose between a traditional DB retirement plan and a new DC plan. During the time period of our study, school districts were required to contribute 9 percent of the salary of teachers taking the DC option to personalinvestment accounts in their names. Neither DB nor DC choosers were required to contribute from their own salaries to the retirement system, meaning that teachers' plan choice did not alter their take-home pay. The benefits of teachers choosing the DC plan vested after just one year, as compared with six under the DB plan. 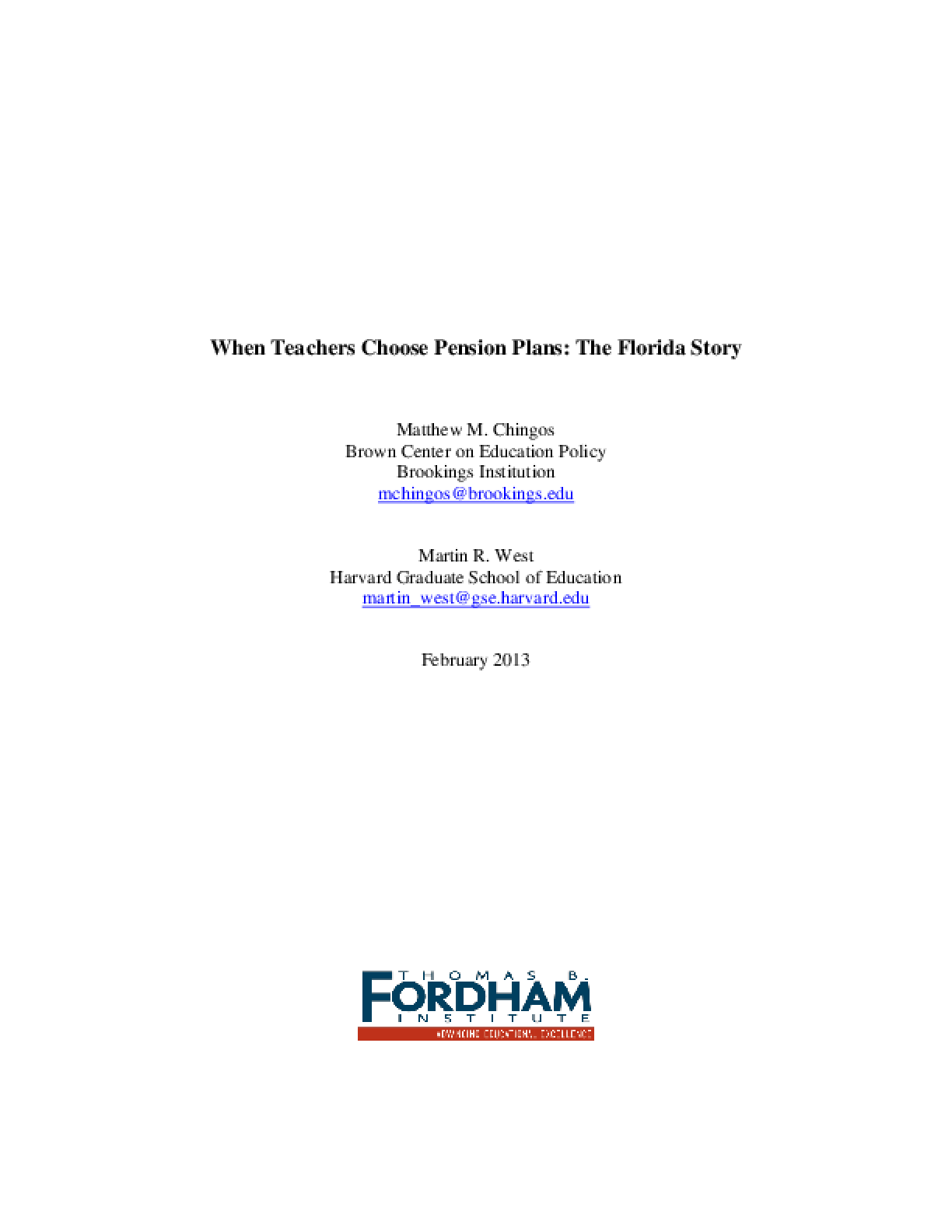