Will the Explosive Growth of China Continue?

The role of China in the world economy is constantly growing. In particular we observe that it plays more and more important role in the support of theworld economic growth (as well as high prices of certain very important commodities). In the meantime the perspectives of the Chinese economy (as well as possible fates of the Chinese society) remain unclear, whereas respective forecasts look rather contradictory. That is why the search for new aspects and modes of analysisof possible development of China turns out to be rather important for the forecasting of globalfutures. This article employs a combination of scientific methods that imply (a) the analysis at the level of Chinese economic model; (b) the analysis at regional level (at this level the Chinese economic model is compared with the regional East Asian model); (c) the analysis at the global level that relies on the modified world-system approach that allows to answer the question whether China will replace the USA as the global leader. It is important that the analysis isconducted simultaneously in economic, social, demographic, and political dimensions. As regards the analysis of specific features of the Chinese model as an especial type of the East Asian model (that is based on the export orientation, capital & technology importation, as well as cheap labor force), we note as organic features of the Chinese model the totalitarian powerof the Communist Party and the immenseness of resources. As regards special features of theChinese model, we note (in addition to "cheap ecology" and cheap labor force) and emphasizethat China has a multilevel (in a way unique) system of growth driving forces, where, as opposed to developed states, the dominant role belongs not to native private capital, but to state corporations, local authorities and foreign business. This explains the peculiarities of the Chinese investment (or rather over investment), which determines high growth rate up to avery significant degree. A unique feature of the Chinese model is the competition of provincesand territories for investments and high growth indicators. As regards perspectives of the global hegemony of China, we intend to demonstrate that, onthe one hand, economic and political positions of China will strengthen in the forthcoming decades, but, on the other hand, China, assuming all possible future success, will be unable totake the USA position in the World System. We believe that in a direct connection with the development of globalization processes the hegemony cycle pattern is likely to come to its end,which will lead to the World System reconfiguration and the emergence of its new structurethat will allow the World System to continue its further development without a hegemon. Finally, the article describes some possible scenarios of the development of China. Wedemonstrate that China could hardly avoid serious difficulties and critical situations (including those connected with demographic problems); however, there could be different scenarios ofhow China will deal with the forthcoming crisis. We also come to the conclusion that it wouldbe better for China to achieve a slowdown to moderate growth rates (that would allow China to go through the forthcoming complex transition period with less losses) than to try to returnat any cost to explosive growth rates attested in the 2000s. 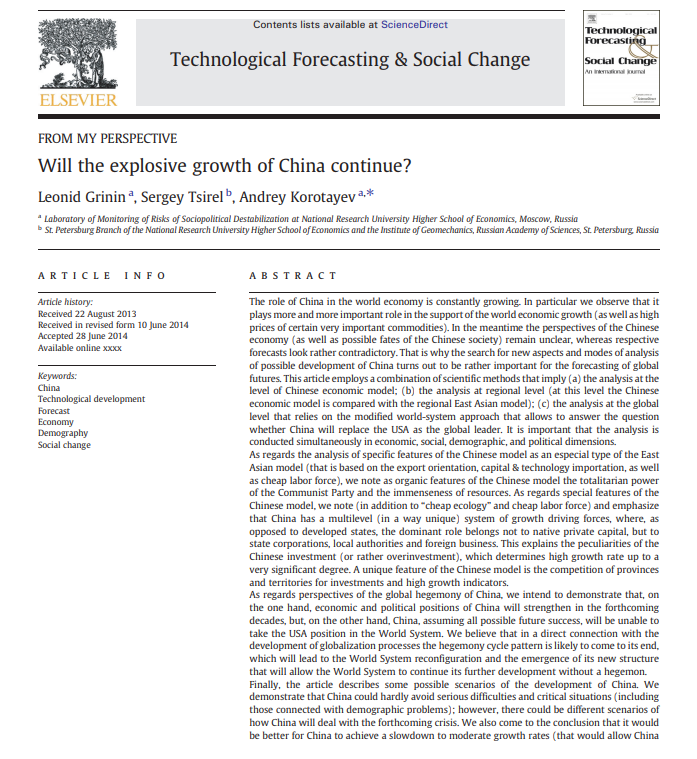