Women in the 2006 Olympic and Paralympic Winter Games: An Analysis of Participation, Leadership and Media Coverage

by Donna A. Lopiano; Lisa Zurn; Marjorie A. Snyder

Increasing women's participation in the Olympic Movement as participants and leaders has been a slow and challenging process. While the number of "events" open to female athletes has increased steadily during the past 30 years, the actual number of female Olympic and Paralympic Winter Games participants and the number of opportunities to medal within those events has yet to equal the number of male participants or medals. The 2006 Paralympic Winter Games statistics are a good illustration of this discrepancy; while there are nearly an equal number of events open to female athletes, the total number of female Paralympic athletes was 99 of 474 or 20.9%. And, while women's participation has attempted to "catch up" with small increases in participation numbers, men's events and participation opportunities have continued to increase, thereby perpetuating and increasing the participation gap. For instance, there were 1,006 women (38.3%) and 1,627 men (61.7%) in the 2006 Olympic Winter Games compared to 886 women (36.9%) and 1,513 men (63.1%) in 2002. Interestingly, the same continued growth of men's sport and, as a result, the perpetuation of the gender gap has occurred in U.S. high school and college sport in the wake of Title IX's push for gender equity (BFHSA, 2006; NCAA, 2006). Some countries claim that the lack of women in their delegation is a result of lack of funding. The majority of these countries cite other reasons for the exclusion of women, such as social, cultural and religious differences (Good, 2002). However, the Olympic Charter specifically states that "Any form of discrimination with regard to a country or a person on grounds of race, religion, politics, gender or otherwise is incompatible with belonging to the Olympic Movement." (IOC, 2004). Thus, social, cultural and religious differences between men and women are not legitimate justifications for the lack of women in delegations. While the International Olympic Committee (IOC) has made significant efforts to play a leadership role in growing women's participation, it has had limited success in encouraging the International Paralympic Committee (IPC), the 203 National Olympic Committees (NOC) and international winter sport federations (IF) to commit to gender equality. Women are also significantly underrepresented in the IOC and on IF boards of directors, the international governance structures that determine whether women's sports are offered in Olympic, Paralympic and world championship competition. There are few women serving as members of National Olympic Committees (NOC), such as the United States Olympic Committee (USOC), that determine the size and composition of their respective national Olympic and Paralympic delegations and whether developmental programs are offered to support women's sports participation. And, like the situation in the United States, the underrepresentation of women is also reflected within each country's respective National Sports Governing Bodies (NGB) boards of directors (e.g., USA Hockey, U.S. Figure Skating, etc.) and at community leadership levels where grassroots participation opportunities ultimately determine the Olympic and Paralympic participation pipeline. Without strong leadership from governing boards at all levels, insufficiencies in financial support and programmatic infrastructure will continue and the number of female Olympic and Paralympic athletes will continue to lag behind men. Olympic status raises the visibility of both sports and athletes, opening new doors to media visibility, high earnings through prize money and endorsements, college scholarships and jobs and key influencer connections. More significantly, Olympic status also ignites the aspirations of millions of girls who are inspired to participate by the heroes they see. With an estimated audience of 2 billion, the Olympic Winter Games is the most widely viewed forum for winter sports (USA Weekend, 2006). Thus, it is important to regularly examine the state of women's participation as leaders and athletes in the Olympic and Paralympic Games. This report specifically examines such participation and leadership in the Olympic and Paralympic Winter Games from both an international and United States perspective. 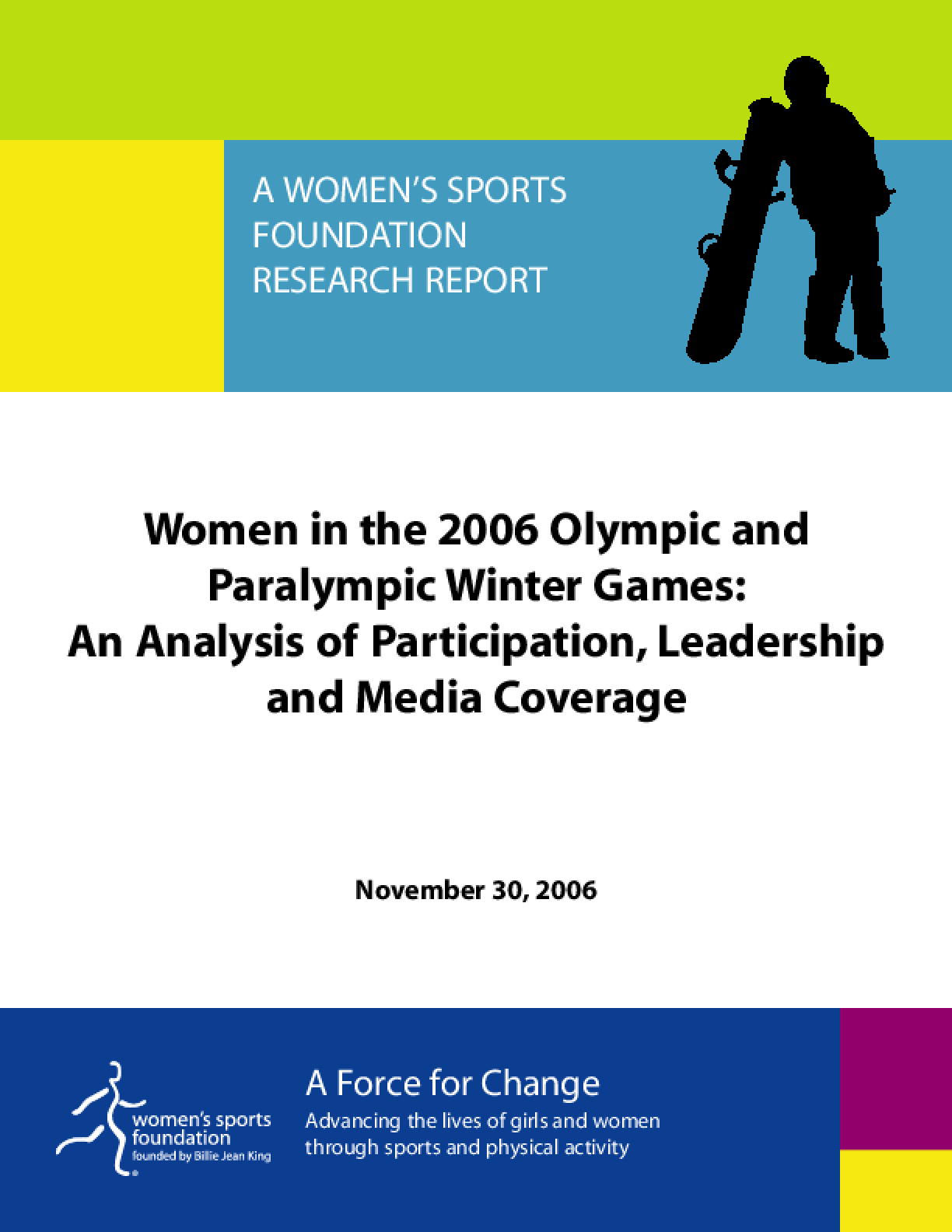